How can we help you today?

Draft ads are not actual Google/Microsoft ads; they exist only in Adalysis until the time they are used to create a real active ad.

Tip 1:  Draft ads will be used only if the auto-pause feature is enabled for an adgroup (see section 1 here) i.e.

2. How are Draft Ads Created

To create a draft ad, select adgroups and choose Create in Manage draft ads menu. Make sure that Auto-pause is enabled in these adgroups as described here.

You can pre-create the draft ads either by defining the full text of the future Ad (headline1, description, etc.) or by defining some partial content (e.g. only headline 1) while choosing to inherit the rest of the future ad text from the ad that will be replaced or from the winner ad of the same adgroup. Alternatively, you may click on the folder icon next to the text line and choose from up to 20 most common patterns currently used in your selected campaigns. 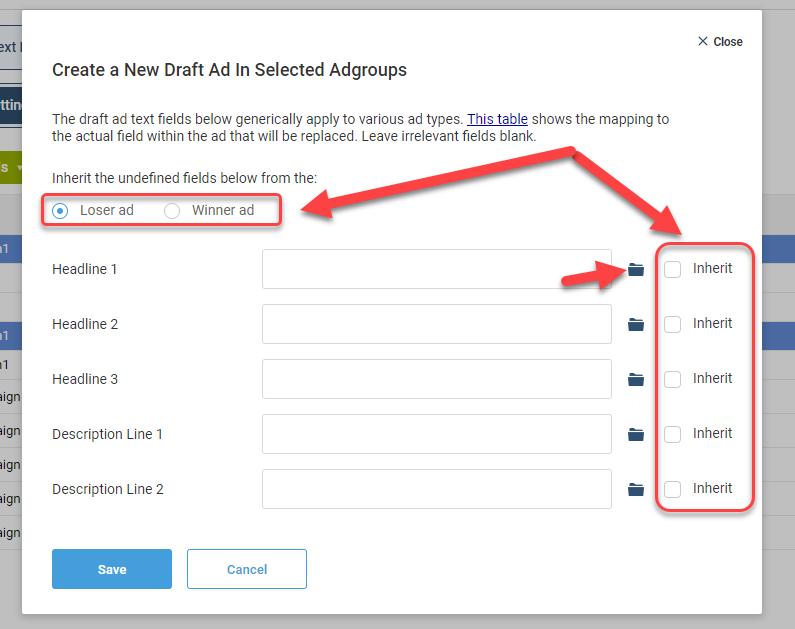 When a draft ad is used to create a new ad after an auto-pause, a copy of the new ad automatically created from the draft ad will be stored as part of the archived test result which you can access in the Archived Test Results.

3. What if the New Ad Couldn't be Created?

If Adalysis encounters an issue while creating the new ad (e.g. policy violation issue), you will receive an email with the details of the ads and failure reason.

You will also see an alert in the Dashboard that points to the exact adgroup where the issue is. Following the alert will lead to the adgroups where the loser ad replacement failed.

Did you find it helpful? Yes No

Send feedback
Sorry we couldn't be helpful. Help us improve this article with your feedback.